Divorce On The Grounds Of Shaking The Foundations Of Marriage - Av. Lider Tanrıkulu
13 January 2023 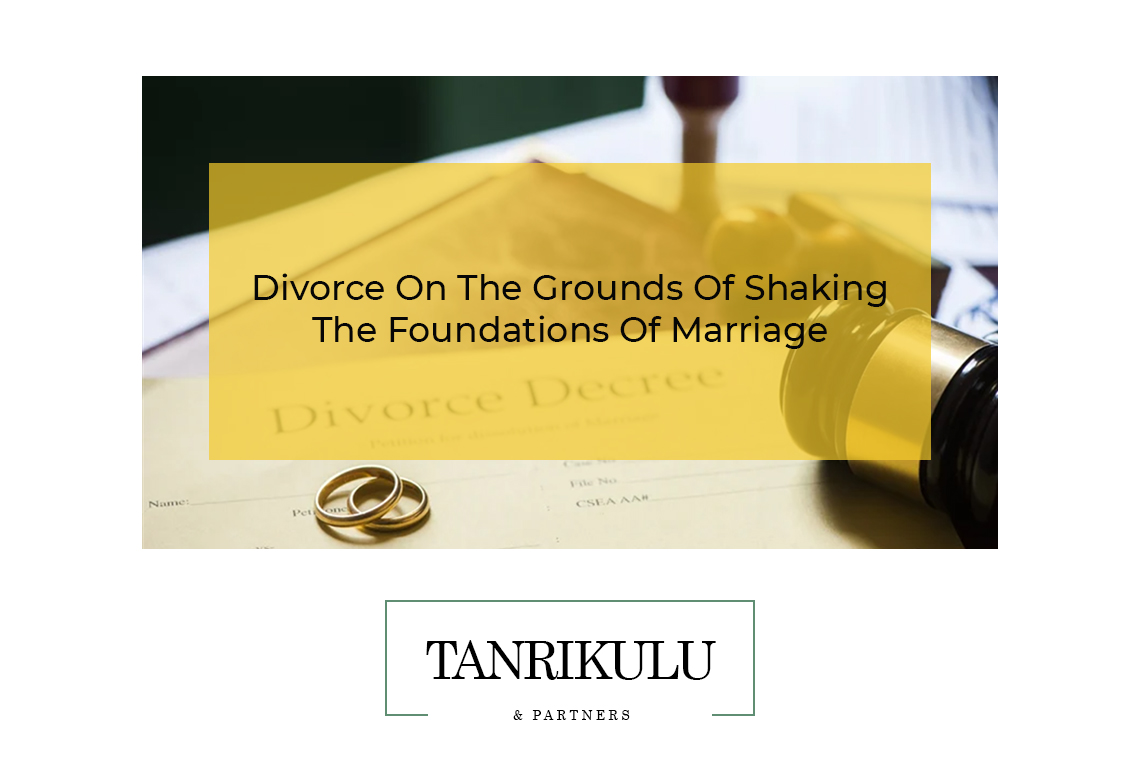 Contents Hide
WHAT IS A DIVORCE CASE?
WHAT IS A CONTESTED DIVORCE CASE?
DIVORCE ON THE GROUNDS OF SHAKING THE FOUNDATION OF THE MARRIAGE UNION IN A CONTESTED DIVORCE CASE
I. INTRODUCTION
A. What is a Divorce Case on the Grounds of Fundamental Breakdown of the Marital Union?
B. What are the Conditions for the Fundamentally Shaken Marriage Union?
1. The marriage union must be fundamentally shaken.
2. The Fundamental Breakdown of the Marriage Union Should Make Shared Life Unbearable.
3. The Defendant’s Failure to Raise the Objection that the Plaintiff is More at Fault or the Failure to Accept this Objection
C. What is the competent and authorized court in a divorce case due to the fundamental breakdown of the marriage union?
D. What are the Rights and Obligations of the Spouses under the Marriage Union?
E. The Occurrence of Events Qualifying as Amnesty
II. Conclusion

WHAT IS A DIVORCE CASE?

WHAT IS A CONTESTED DIVORCE CASE?

A. What is a Divorce Case on the Grounds of Fundamental Breakdown of the Marital Union?

One of the types of contentious divorce cases, divorce due to the shaking of the marriage union from its foundations, also known as severe incompatibility, is one of the general grounds for divorce. In this case, it is claimed that the marriage union has been shaken for any reason other than the reasons specifically stated in the law. If the spouses do not meet each other’s expectations and therefore the continuation of the marriage has become impossible, it means that the marriage union has been shaken from its foundations. Since this can be caused by any reason, in order for the legal reason here to occur, the other spouse must no longer be able to endure this shaking, that is, the continuation of the marriage cannot be expected from him/her. Regardless of the fault condition, both spouses may file for divorce on the grounds of shaking the marriage union from its foundations. However, it should not be understood that fault is insignificant. Because fault is of great importance in terms of the outcome of the case. Thus, if the fault of the plaintiff spouse who shook the marriage union and made it unbearable is more severe, the defendant has the right to object in the divorce case filed. These issues are stated in Article 166/1-2 of the Civil Code as follows;

Article 166/1- “If the marriage union is shaken to such an extent that they cannot be expected to maintain a common life, either spouse may file for divorce.”

Article 166/2- “In the cases specified in the paragraph above, if the fault of the plaintiff is more severe, the defendant has the right to object to the lawsuit filed. However, if this objection is in the nature of abuse of right and there is no benefit worth protecting for the defendant and children in the continuation of the marriage union, divorce may be granted.”

The judge has a wide discretion at the point of examining the events that reveal the shaking of the foundation of the marriage, which is characterized as a contentious divorce case. Therefore, this general ground for divorce is of a relative nature. In other words, in order for a divorce to be granted, it is not sufficient to prove the event that shakes the marriage union from its foundations. All kinds of disagreements and incompatibilities that may arise between the spouses can be considered within this scope as they may shake the marriage union from its foundations. Therefore, the reasons for filing this divorce case are not limited. As a matter of fact, this type of lawsuit is one of the general grounds for divorce.

B. What are the Conditions for the Fundamentally Shaken Marriage Union?

1. The marriage union must be fundamentally shaken.

In the institution of marriage, severe incompatibility between the spouses is an indication that the marriage union has been shaken from its foundations. It is enough for the consciousness of unity to be exhausted in one of the spouses, and what is meant by shaken from the foundation is that there is a significant difference of opinion and emotion between the spouses. When one of the spouses distances himself/herself from the other spouse to the extent that he/she cannot show love and respect to the other spouse, when the unity of ideas and feelings decreases, when the spirit of living together fades, when there is hatred instead of love, fear instead of respect, distrust instead of trust, this means that the consciousness of togetherness has disappeared. In order for this disagreement and incompatibility between the spouses to result in divorce, it must be of such a degree as to shake the marriage union from its foundations. In other words, not every reason that is not serious will result in the shaking of the marriage union from its foundations. In determining this, the judge should look at whether the spouses’ spirit and desire are at the point of continuing the marriage or whether the consciousness of common life has been exhausted. In practice, the most common grounds for divorce are breach of fidelity obligation, infidelity, indifference, lack of love, lack of sexual intercourse, economic problems, insulting the spouse and his/her family, violence against women, psychological violence, physical violence, neglecting the duties of unity, continuous alcohol use and gambling.

2. The Fundamental Breakdown of the Marriage Union Should Make Shared Life Unbearable.

3. The Defendant’s Failure to Raise the Objection that the Plaintiff is More at Fault or the Failure to Accept this Objection

Divorce on the grounds of the breakdown of the marriage union is not a ground for divorce based on fault. However, this does not mean that the fault is insignificant. The fault of one or both spouses may lead to the shaking, or both spouses may be faultless. If the fault of the parties is equal in the events that shake the union from its foundations or if both spouses are faultless, each spouse has the right to divorce, in this case, the filing of a divorce case by one of the spouses does not prevent the other spouse from filing a counterclaim within the time limit. The counterclaim filed by the spouse filing a counterclaim within the scope of the facts in accordance with his/her own claim may be based on the shaking of the marriage union from its foundations, or it may be based on adultery, for example. As a matter of fact, if the defendant, the counterclaimant, claims that he/she has less fault than the plaintiff in the realization of the events that shake the union from its foundations, he/she may object to this lawsuit filed in accordance with Article 166 of the TMK. The party with less fault in the divorce case filed due to the shaking of the marriage union from its foundations must file his/her objection against the allegations and, if necessary, file a counterclaim within the legal response period of 2 weeks after he/she learns the grounds of the lawsuit and is notified of the lawsuit petition. The objections against the facts relied upon by the plaintiff must be sincere and real. This is because the Law has authorized the judge to prevent abuse of this right.

C. What is the competent and authorized court in a divorce case due to the fundamental breakdown of the marriage union?

The competent court in divorce cases is the family court, and where there is no family court, the civil court of first instance is authorized to hear the case as a family court. However, failure to render the decision as a family court is a ground for reversal. As for the competent court, pursuant to Article 168 of the Civil Code, “The competent court in divorce or separation cases is the court of the place of residence of one of the spouses or the place where they have been living together for the last six months before the lawsuit.” Since the provision of the law clearly states that “they have been living together for the last time for six months”, this place does not have to be the place of residence. It is sufficient that it is the place where the spouses actually reside together.

D. What are the Rights and Obligations of the Spouses under the Marriage Union?

With the institution of marriage, a debt relationship arises between the parties. The obligations imposed on the spouses by our law continue throughout the union. The spouses’ violation of their duties of unity, in other words, their failure to fulfill their duties of unity, is one of the behaviors that undermine emotional trust and is one of the behaviors subject to divorce because it is a behavior towards emotional violence in the divorce case due to the shaking of the marriage union from its foundation. Article 185 of the TCC, which is the constitution of marriage, states that the spouses are obliged to mutually ensure the happiness of the union, to meet the needs of the children, to be loyal and helpful to each other. Considering that marriage is based on sharing, violation of the obligations set forth in Article 185 of the TCC is one of the important factors that cause the union to be shaken from its foundations.

In addition, if one of the spouses is unfaithful to the other within the marriage union, it is a violation of Article 185/3 of the Civil Code. Ömer Uğur Gençcan, the President of the 2nd Civil Chamber of the Court of Cassation, called this a divorce due to the shaking of the marriage union from its foundations;

Spouses are obliged to participate in the expenses of the marriage union as partners, regardless of whether they are men or women. This obligation continues from the beginning to the end of the marriage. It is important to note here that the Legislator has regulated that the spouses can fulfill their obligations not only with their financial means but also with their labor. It would be correct to say that this regulation is appropriate considering the fact that especially women in our society do not have full economic freedom with Article 186 of the TMK.

Article 186/3- “Spouses participate in the expenses of the union with their labor and assets in proportion to their power.”

E. The Occurrence of Events Qualifying as Amnesty

The party applying for divorce must maintain his/her will to divorce during the proceedings and must not exhibit behaviors that constitute forgiveness. Otherwise, the divorce case filed due to the fundamental shaking of the union of marriage must be dismissed. In order for a pardon to be granted in the divorce case, an unconditional declaration of will or an actual attitude and behavior indicating forgiveness must occur and these must be proven with concrete evidence. The behaviors that constitute forgiveness can be listed as reconciling, showing the will to forgive, meeting with tolerance and continuing the union despite the events, living in the same house, going on vacation together. It is important to note that after the forgiveness is realized, a divorce decision cannot be made based on the previous events between the parties.

If the spouses, who legalized their union with the institution of marriage with the aim of continuing their lives together, experience significant differences of opinion and feelings, it is accepted that the marriage union is shaken from its foundations. In this case, spouses may terminate their union through the institution of divorce. In our law, the principle of causality prevails in divorce. So much so that in order for a divorce to be granted, a lawsuit must be filed based on at least one of the grounds for divorce regulated in the Law. Nowadays, the parties mostly seek divorce on the grounds of “shaking the unity of marriage from its foundations”. As a result, the consequences of divorce are of great importance for both parties and children.